A few things that are going on around town and, really, around the state.

Also, something that has been in the local food plane the last few months is happening next week. Many local chefs, restaurateurs and all-around foodie folk are banding together to come to the aid of a local restaurateur in need. Mike Rothman is the owner of Skippy’s Hot Dogs, famous for their pretzel buns. Mike has glioblastoma, an aggressive form of brain cancer and had some tumors removed earlier this year. Even though he has insurance, there’s only so much that it will pay and meanwhile he has a beloved (by him and the WSNC folk) restaurant that is sitting idle and unopened. Mike had to move back to Pennsylvania in order to be with family that will help with his recovery.

In what they’re calling “Mike’s Week” (#MikesWeek on social media, please), the awesome people behind some of Winston’s best downtown restaurants are coming to the rescue; at least coming to a relief. They’re going to open Skippy’s for one week starting April 23 and going through April 30. All the proceeds from this project will go to Mike. These opened days are done by volunteers of the restaurants involved, including their executive chefs, owners, bartenders, waitstaff and dishwashers. Everyone is getting involved.

The restaurants that are involved include: Spring House/Quanto Basta, Jeffrey Adams/Old Fourth Street Filling Station, Mozelle’s, West End Coffeehouse, DiLisio’s, Kabob’s on Fourth, Mary’s Gourmet Diner, Sweet Potatoes, Finnigan’s Wake and King’s Crab Shack/Silo Bistro/Willow’s Bistro. I hear there is also inquiries about more openings. Each day the restaurant(s) on duty will create their own twist on hot dogs. Unfortunately, Mike is the only one that does the pretzel buns, so that’s going to be missing, but the restaurant community is coming to his aid in a really awesome way. So, between this Saturday, April 23 and April 30th, won’t you stop by for a great dog for a great cause?

Last week on The Less Desirables, they (we) had Chef Kris Fuller (and her wife, Rachel Walker), owner of Crafted: Art of the Taco and Crafted: The Art of Street Food in Greensboro.  You probably know, that she is opening, finally,

Crafted: Art of the Taco here in Winston-Salem. It will be just south of the intersection of Sixth and Liberty on Liberty Street. She’s very excited about the opportunity and we are very happy that she’s bringing that deliciousness to our fair city.  The timeline, as of right now, is looking like late fall. We that follow restaurants and happenings realize that you take the target and add a little time to it to be realistic. That’s true with just about any business.

Without going into much details about their history, Crafted: Art of the Taco (East), Kris and her mother, Rhonda started another popular restaurant, The Bistro, in Adam’s Farm and had to close it due to road development. The success of that restaurant gave them motivation to open another. Art of the Taco wants it known that they are definitely not a Mexican restaurant, they’re a taco joint, plain and simple. Or, not really that simple. I’m sad to say that I haven’t actually eaten there, but Kris made me promise to come down and try it before Art of the Taco West opens. There’s also talk of a certain “branded” taco when they do open. We’ll see what happens with that.

In news outside Winston-Salem, even outside of the Triad, a Triangle brewing staple has announced that it is closing. In fact, the name of the brewery is Triangle Brewing Company and they’re closing their doors on April 30th. Triangle has been sold at City Beverage, at least in the past, and there are fans of that brewery here in Winston. The Less Desirables met one of their most loyal fans, we call him: Superfan Damien, at Triangle so it’s hallowed ground in

Their brews include: Belgian-Style Strong Golden Ale, an IPA, Belgian White Ale, Imperial Amber Ale, all of which were available in cans and sold in this area. There are plenty of other styles that they produced. They will open, as I stated, for the last time at 4pm on April 30. They will stay open until the last drop of beer they have left is gone (or until 2am, whichever is sooner). So, since it’s the same day, perhaps you start with breakfast at Skippy’s and head to Durham for a beer-filled send off? Just drink responsibly and take a designated driver.

I don’t know all the details on why they’re closing but my “man on the street,” Superfan Damien is going to find out and let me know so I can report on it.

So that’s the things happening this week that I found noteworthy. There are plenty of things going on and I’ll do my best to update so you know! If you have WSNC food news and want my readers to know about it, please feel free to send me an email.

Here’s the pertinent info (mostly from the Facebook page of the festival):

“The 4th Annual Burke Street Food Truck Festival will be held on Saturday, April 9th from 3 p.m.-8 p.m. within the Burke Street area of Downtown Winston-Salem. This rain or shine event is FREE to attend and fun for all ages.”

Last year, they had around 30 trucks. Attendance was around 12,000-15,000. People complained that the crowds were too thick, the lines were too long, the trucks ran out of food, not enough places to sit and not enough bathroom access. This year, they’ve increased the number of trucks from 30 to over 60. They’ve increased the overall footprint of the festival and increased the seating and bathroom ratio. They’ve also added a VIP option that gets you in and makes the food available to you from 2 p.m. to 3 p.m. before anyone else is allowed to congregate. The number of VIPs have been capped at 500. Some have complained about that: “we have to pay $20 for nothing and still buy the food?” Well, yes. However, if you think of this way, 12,000 people with 30 trucks = cluster-mess. 500 people with 60+ trucks? Spread out and enjoy. I believe it has value. But, I get that it may not be for everyone, but some it may be.

Also, there will be many arts/crafts/etc. vendors and beverage vendors throughout. Also, there’s singer/songwriter stage (Stage 2) that will be at the top of Burke Street near Fourth. The Main Stage will be near Old Winston Social Club and will have bands from 4-8pm. Those bands are Suitcase (opening the show), Wafer Thin and Luxuriant Sedans (headlining).  In addition to that, I will be emceeing the main stage festivities. Come up and say hello.

It’s going to be a great day for food, drink and entertainment. Yes, it may be a little cooler than you’d expect/want but it will be worth it.

Here are the trucks/vendors that will be participating in the festival (alphabetically; list may not be complete):

I was given the opportunity to screen and review a film for the RiverRun International Film Festival. You may ask yourself, why am I reading a movie review on a food blog? Well, it’s because the film is about food, sort of. It’s about two restaurants in New York City; one that was an “institution” and well known with a large repeat clientele and one that is 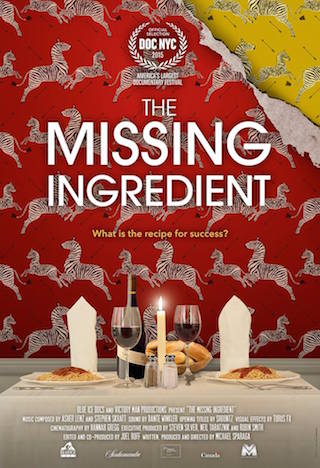 newer, still trying to find its place and purpose. The film is a documentary called The Missing Ingredient (2015), directed by Michael Sparaga.

Gino’s, a multi-decade establishment (it opened in 1945), a staple in Manhattan’s Upper East Side achieved international status, partially due to its food, mostly because of the atmosphere and practically because of its red wallpaper adorned with two zebras, the smaller missing a stripe with arrows. It was a busy, no reservation, hipster haven (when being a hipster was cool in the 60s and 70s) that drew celebrities, dignitaries and other important people and was a way of life; probably more than being a restaurant.

Pescatore, is a Midtown Italian restaurant that has been somewhat popular since 1993, but just can’t gain traction and is dealing with stiff competition of other restaurants that are moving in around it, especially since the focus of the neighborhood has shifted. Now, that Charles Divigne, the new restaurateur of Pescatore wants to try other tactics, a different approach to attract new business to his establishment. He decides to “borrow” something from Gino’s. The move is controversial and the reaction is mixed. This film examines why only a handful of eateries of over 24,000, especially in New York, ever reach the status of “institution.” I don’t know that it ever finds its answer but the question is interesting.

The film interviews the former owners, other restaurateurs and long-time regulars of Gino’s about what made the now closed establishment an “institution.” The film explores the reasons for that closure and the emptiness left in the lives of those who called it their second home. Conversely, you hear the perspective of Devigne about his decision-making and the designers quitting in the process, searching for the “missing ingredient” to put his restaurant on the map. You do have to suffer the arrogance of the executive chef of Pescatore (whose name I don’t recall ever being mentioned) and Gael Green, former food critic for New Yorker magazine, but mostly the documentary felt genuine, even when you yourself may question why Devigne does what he does.

Being a lover of food and also being a fan of the behind-the-scenes aspect, this film gave me a lot to go on. I think you’ll enjoy it, too. The film is being shown at 1:00 pm, at the Hanesbrand Theatre, located at 209 North Spruce Street in Winston-Salem. Tickets can be purchased at the Stevens Center Box office or by visiting RiverRunFilm.com.