I had the distinct honor of attending the Winston-Salem Open yesterday with my good pal, Jim Young. However, our journey there was not for tennis. While that is thrilling, I am sure, for some people, I was there for one reason only. Cheese!

What do they have in common, cheese and tennis? I have no clue. However, being at an event like the WSO, and seeing the cheeses in the environment — all the pomp, circumstance, grandeur and so on — it made perfect sense.

I have long said that cheese is nature’s perfect food. Yes, I understand that while things with cheese making happen naturally, it is really a man-made thing. You get the picture, though. So, when I received an invitation from the representatives of Cheeses of Europe to attend this expo of cheese, I couldn’t, and wouldn’t turn that offer down.

Jim and I were treated to the finest of French cow’s milk cheese and were guided by Richard Clarke of 15° Marketing who represents the Cheeses of Europe and is also an admitted, avid cheese connoisseur.

We tried the Emmental, which is a Swiss-style cheese that is mild and easy to eat, but it is savory as well. It was creamy. That was one thing that we found with most of these cheeses: creamy. Next up was a strange and unique cheese to me, the Mimolette. The Mimolette is a bright orange cheese, at least this one was, which comes from the addition of the seasoning annatto. The taste was a flavor punch at first, pungent but pleasant and then hints of butterscotch and nuttiness came through.  This cheese was a 12-month aged cheese. The 24-month aged was banned by the USDA because the cheese mites could cause allergic reactions if consumed in large quantities. It surpassed the “mite-per-inch” rule. The 12-month, however, is perfectly fine and it is perfectly delicious. It was a bit denser in texture.

We then moved to the creamier brie styles of cheese. There were two brands of the regular brie and I wish I had written down (or had them write them down) the names. The first was good and creamy but the second was even creamier and it had hints of that “ammonia” that I actually like in brie cheeses. Do not read that and be turned off. The mold that is added to make that beautiful white rind is what causes that smell. As Richard, Jim and I talked about, the smellier the cheese, the more potent the flavor. The rind gave the cheese a good texture as well. After those “ordinary” brie we moved on to the Triple Crème Brie. Again, two different brands and each with its own qualities. The first was creamier and had a milder flavor. The one thing I did not care for was the bread they put the cheeses on. It is my understanding that they were given the bread. I think even they liked it better plain. In and reality, I like cheese on its own. I do not need a lot of pairings to make me happy. Then again, I do not turn down a good wine or beer when the opportunity arises. I believe of the two and possibly the entire selection, this was Jim’s favorite cheese. The second Triple Crème was my favorite of the two. It was a little cakier and more pungent, which is how I like my brie. Again, the stronger the cheese the more flavor, at least by the general rule. I have come to really enjoy brie more and more. When I first tried it some 15 years ago, I could not get past that ammonia flavor but, I persevered and here we are and it is one of my favorite styles. I think that cheese would be great on a grilled cheese sandwich. Add some balsamic or even bourbon braised stonefruit and dark chocolate to it, put it on a nice Italian or French bread and grill it up. Now my mouth is watering.

Next up was the Comté. Comté is traditionally a little denser and is smoky or nutty. This that we tried had those qualities, but also a little fruity and silky in texture. I have always enjoyed comté cheese.

But, the best, in my opinion, was yet to come. I have to say bleu cheese is my favorite kind of cheese and that’s saying a lot as I really like all cheese, at least that I have tried. The Roquefort almost made my eyes roll back in my head it was so pungent and acidic, salty and tangy, dreamy and creamy. This stuff was everything a cheese lover could want in a cheese. There are not enough words in the English language to describe how delicious this cheese was. Again, it was better without the bread. The color was bright and the texture silky and crumbly. It fell all over the place as I was eating it. My evening was made right then. And, while not cheese, I have to say if you have never had Président® French butter, you’ve never had butter. It is like eating flavorful velvet and there is an ever-so-soft hit of nutty in there. That was on the table as well. Try it. Thank me later.

After the wonderful tasting tour, we sat down with Richard Clarke and had a nice conversation with him. I asked him about his history with cheese. “I think it was probably more happenstance, but my father used to bring home different things on Friday night and he and I enjoyed it together. That was our thing,” he said. “He would bring home some ‘stinky cheese’ and I would try those with him. I didn’t always like it but it was always fun to try things and spend time with him. There was one time he made a bleu cheese, diced onion and butter mixture and we put it on our steak. And, from that point on, I could never eat steak without it.”

Tim (me): “So that stinky cheese that you didn’t like so much, at the time, do you like them now?”
R: “Absolutely, I do. That’s the bleu cheese we talked about, and I eat it a lot.”
T: “What is your favorite kind of cheese?”
R: “I kind of like the hard, nutty, textured cheese like Parmesan, Comté, even the Mimolette. But, the Bleus are the ones that put me over the top.”

I asked him about the perfect cheese board with a wine pairing. He said, “If you’re going to a party and you really want to impress people, bring a bottle of rosé, bring a creamy cheese like a Triple Crème, bring a hard cheese like the Mimolette or Comté, and bring some bleu just to round out the flavors. Bring about 5 cheeses. Also, bring a little story about them.” 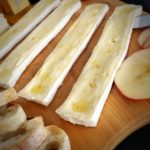 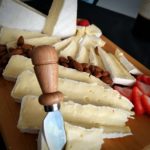 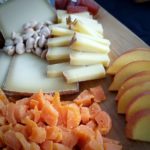 The cheeses that Richard promotes can be found in just about any major grocer’s cheese section. Richard is from New York, but is traveling with the US Open series and said he likes to visit the local grocery stores and check out their selections. The three that he mentioned by name were Harris Teeter, Publix, and Whole Foods, but I can guarantee you that most of the chains around town and including specialty shops and stores will have these cheeses. If not, Richard said to absolutely ask the cheesemonger about getting it for you. Jim asked about the public’s aversion to stinky cheese and Richard’s argument was spot on. As I mentioned earlier in this article, the stinkier the cheese the more flavorful the cheese, you just have to make it past the smell. He says, “with cheese, you want to see it, smell it, feel it. The smell of it is so important to how it tastes. A lot of people at our sampling today who say they don’t want to try it because it may smell a little bit. But, after I convince them to just try it, it becomes their favorite cheese.”

I mentioned in the interview that people are looking for something to “wow” them and while the tamer cheeses are certainly delicious, you need the stronger aromatics of “stinky cheese” to get that “Wow Factor.” Richard agreed.

Richard asked how many times we have gone to a party and tried a cheese we had never had before and found that you really loved it? Well, because I am a “foodie” and a self-proclaimed “cheese lover,” that happens a good bit. Cheeses of Europe now have an amazing app that acts as an amazing resource for trying, tracking and pairing your favorite, or new favorite cheeses. You can get it for both iPhone and Android devices. I equate it to Untappd, except for cheese.

Richard and his crew did a phenomenal job at presenting one of my favorite things, cheese. They are quite knowledgeable and helpful when it comes to these creamy, pungent and yes, sometimes stinky treats. They will be in the USTA tent through this Saturday, August 25. So grab your tickets, talk with them about fromage (that is French for cheese) and enjoy some tennis. If you don’t make it out to that, download the app and start your own cheese journey. It is the cheesiest! Bon appétit! Oh, and tell them I sent you!