Mauritian cuisine is, typically, a borrowed method of cooking, borrowed cultures, and adapted over years of French, Indian, British, Chinese, and African occupation and habitation. Mauritian dishes are not too spicy, by default, but can be modified to be as spicy as you’d like. On our trip, especially this being the first “trip” we took on the Country Spinner, we went with three dishes, Cheese Fritters, Ojja, and Rougaille. I’m going to split them throughout different posts as to not overwhelm you with text and make it difficult to follow. Also, I’m going to tell you what I messed up on or did very well in true transparency. This is really more of an experiment than how to do everything right. I did mess up some things. We worked around it. We served it on top of couscous, which is popular throughout Africa. Enjoy!

*I used 1/3 each red, orange, and yellow pepper. I don’t like green bell peppers.
**I used just one serrano pepper, seeded and chopped. Use more for more heat.

If you make this recipe, please let me know how it turned out and I’d love to see some pictures. Either email me or hit me up on Facebook, Twitter, or Instagram.

Thank you for reading!!

After mentioning my “Breakfast Deviled Eggs” that I make on the podcast, a few people have asked me for the recipe, so, here it is! 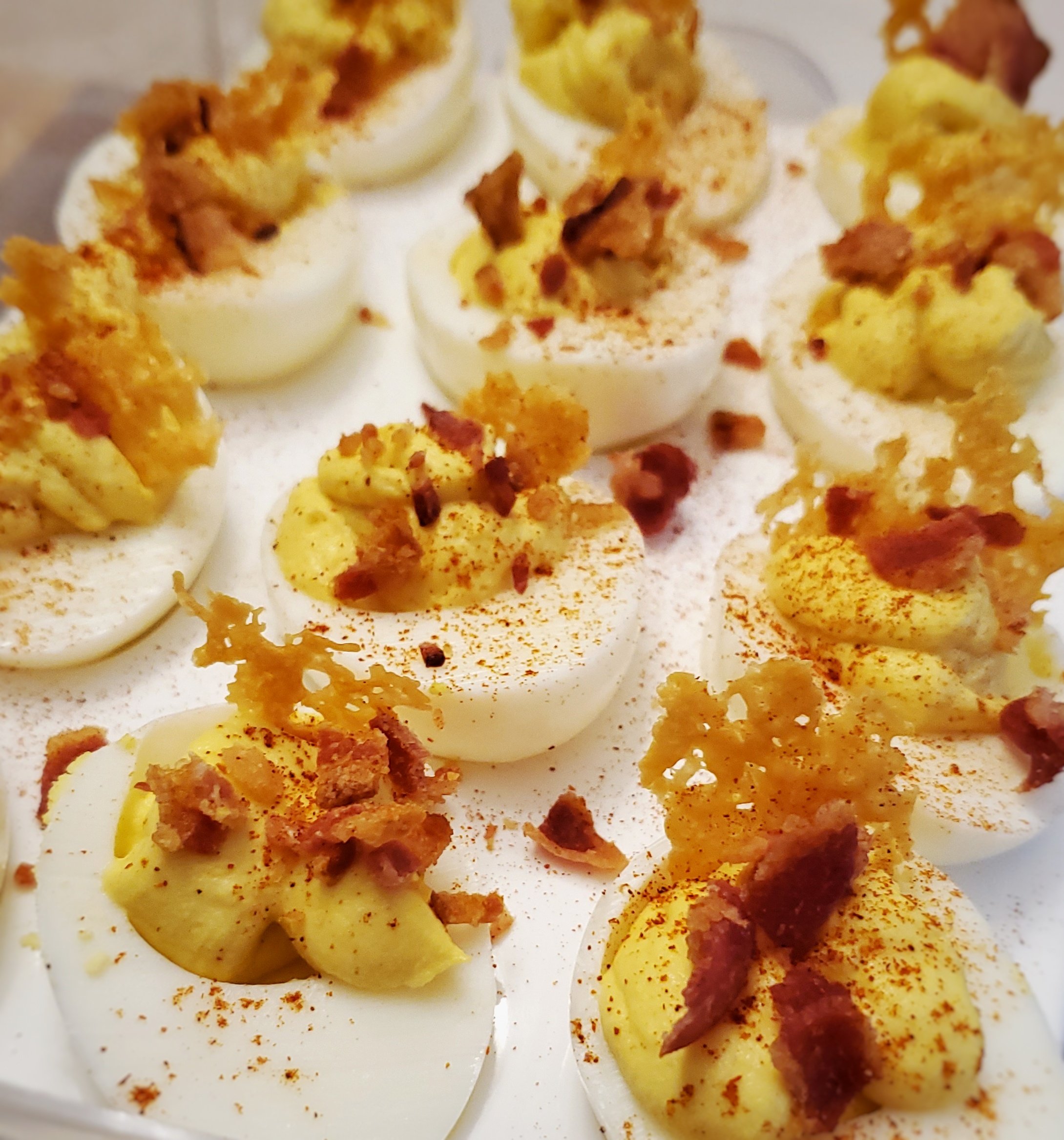 This is how I do it, be creative, adjust as you need. If you make this for Thanksgiving or any other times, please take a picture and share it with me. I want to know what you think! I will have a picture on Thanksgiving. I don’t have any in my archives and won’t make these until Thursday afternoon. Enjoy!

In Episode #105, proudly recorded at The Lab at Industry Hill: Tim and Ray talk about:

No poll this week!

The Man Who Ate the Town is part of The Less Desirables Network. Give it a listen on iTunes, Stitcher, Podcast Addict and TuneIn, basically anywhere you can listen to podcasts. Or you can listen here (at the bottom of the post).

I was honored to be a guest contributor to Triad City Beat, for their “Dinner Guest” column in “Triad City Bites.”

This time around I stayed with the minimalizing sodium theme and talked about making spaghetti sauce. Executive Editor, Brian Clarey, allowed me to use my humor in it and I was proud of the result.

So, if you’ll do me the favor, you can read the article either in the print form, which can be found all around the Triad, or you can read it on their website, and you can do that HERE.

Thank you so very much Brian and Triad City Beat for the opportunity.

And, thank you to our readers and listeners for supporting our blog and podcast.

I have said it before and I will always repeat it. There is nothing like cooking with your son what it’s something that you both have a passion for. Tonight, we made homemade Spinach Foggia pizza. Never heard of Spinach Foggia pizza? Then you never went to Prince’s on the Park in the 80s and 90s or didn’t look in Harris Teeter’s frozen pizza aisles.

Spinach Foggia pizza was a creation from Mike Prince when he owned Prince’s on the Park which for those in Winston-Salem, now, it was where The Tap sets now in the West End. It was a pizza parlor/sandwich shop/wing joint that had the best pizzas in town, the best baked wings and the best sausage sub. It was a creaky old place and it was run down. That wasn’t Mike’s fault it was the building owners’ and one of the reasons why they closed down. Their signature item though was the Spinach Foggia pizza. As you may guess, it has spinach. Yep, great leafy green goodness on a pizza. I hadn’t ever heard of that at the time. In addition to the spinach, it had mushrooms, tomatoes, oregano, garlic and olive oil with mozzarella cheese. If you notice, there was no “sauce.” On this pizza, it was just the ingredients; the olive oil made it “sauce,” from what I remember. In addition to making it in the restaurant, Mike put it in stores. It was mostly Harris Teeter and Golden Apple (a high-end grocery store that was ahead of its time, which closed in 2016). I will be honest, I never had it in the stores. But, I had it plenty of times in the shop.

So, when I was looking for something for our Thursday night menu on Sunday, I decided to do my own version of this. I had never made it before and I was excited to do so. So, Trey, my 16-year old son, and I modified it up a bit.

Another pizza that Prince’s made was a White Lightning pizza. I don’t know what that was exactly but it was made with a white sauce instead of red sauce. So, I kind of wanted to mix the two ideas. Also, I don’t like pizzas without some kind of meat on it so we got some loosely packaged Italian sausage and sauteed it to put on the pizza.

We started by making our own dough, adding honey to sweeten it a bit.

My son made the white sauce. He melted 2tbsp of butter and put 4 cloves of minced garlic in there, sauteeing them before adding 3tbsp of all-purpose flour, ¼tsp each of salt, black pepper and oregano, whisking it until mixed. He then added a ½cup of heavy cream (we should have used whole milk instead but it still tasted great). Letting it set up, he added ½cup of freshly grated parmesan cheese. It was a little thicker than we wanted but that’s where the milk would have made a difference. But, again, the flavor was great.

So, for the pizza, we spread out the dough on a pizza tin, spread a little cornmeal over it, and spread the white sauce. We put a little olive oil over it. We thinly sliced a tomato and cut the slices in half. We placed them around the pizza, followed by baby bella mushrooms. I didn’t put garlic on the pizza because it was already in the white sauce. We spread the sausage and put freshly chopped oregano and basil on the pizza. We then covered the pizza in freshly grated mozzarella cheese. We popped it into a 500° oven for around 15-17 minutes.

We were both very pleased with the outcome. The dough wasn’t overdone or underdone. The ingredients worked well together and it was quite a filling pie. It was really good.

I believe it was extra good because I did it with my son. I hope you try it and I hope you have great success with it. I thank Mike Prince for introducing me to that delicious pizza all those years ago. I am also glad that I got to do my own modified version, again, with my son.

I do apologize that the picture isn’t up to my usual standard, but I was kind of “off the clock” and it is what it is.

No rights assumed for this picture.

This blog has always been about food. That’s why it’s called The Man Who ATE the Town. I have always focused on restaurants in Winston-Salem and fear not… that’s what I will continue to do; no doubt. I moved into being a food news source, as well. Most of that again, focusing on WSNC, but sometimes venturing outside of that realm when need be. Then I added the podcast on The Less Desirables Podcast Network (which I also own). All of that is fun and good and I’m not stopping any of that.

But one thing has changed for me. I’m cooking at home more, now. Why? Don’t I like eating in restaurants as much? Well, yes. I absolutely love eating in restaurants. Truth be known, I’d much rather eat out all the time, but it’s not financially feasible or realistic. There are two main reasons why I’m doing this, now. My wife and my son. There’s a lot of other smaller reasons but those are the two biggest.

On Thursdays, my son, Trey, and I have “guy time.” That time includes us cooking a meal together and watching a movie (currently that means the James Bond series). I’m hoping that he develops a love for food like I have. He gets to do a good bit of the chopping and stove work. We do some simple stuff and some intermediate level stuff. A little this. A little that.

On Sundays, I have Trey with me, as well. The bonus is that Stephanie is home with us, as well. So, we have started cooking, the three of us, together. We each take our places in the fray and do what we need to do to make the best meals we can. It’s fun. We get bonding time and we get great food out of it. Mostly. Sometimes we overdo something or underdo something. We’re not professional chefs or cooks, we just do what we can. I’d say we’re professional eaters, though. I don’t know if that’s true or not, but I like to say it.

So, that brings me to the reason of this post. This is the start of a new column that I’m going to write called: From the Home Kitchen. I will be writing this to highlight the creations that my boy and my wife and I make. If you don’t hear about it, don’t think that I’m going to forget about it, we’ve really messed something up or we didn’t do anything. Sometimes we make things that aren’t that exciting or sometimes we may actually mess up, you never know. Just be on the look out for it. I’ll leave recipes when possible and pictures, as well.

I hope you enjoy it and I’d love to know if you tried the recipes or if you have recipes that you want to share with me that we can do. A few things to remember, onions are okay as long as they’re minced very finely, shallots are okay in the same instance, no asparagus, no grapefruit. Those are the rules. If you have recipes, send them to me via email. As always, thank you for reading and thank you for listening to the podcast…