Joey Burdette and Terry Miller, co-owners of Twin City Hive have announced that they are moving the popular coffee house to a new location. But, won’t this create a chink in the canonical armor of TCH? Absolutely not! This will make everything better.

First of all, the location, while moving, is only moving about twenty steps away. They’re moving to the back of the breezeway in the location that they’re currently occupying. So, in essence, they’re not changing locations, at all. What will change, however, is the overall scope of how the business will be operating. 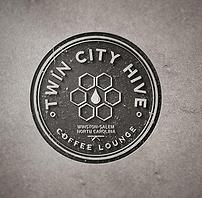 Joey and Terry walked us through the new, larger space and gave a tour of ideas and vision. The old location, once the location of McCormick & Smith attorneys, has several separated spaces including conference rooms/meeting spaces and a kitchenette. The proposed layout will retain the front conference room that can be reserved/rented for business meetings, gatherings, etc. The next conference area will have the frosted glass and framing fixtures removed and seating and tables will provide a comfy lounge area around a proposed fireplace. The largest room, however, is in the front (or back?) and will contain more seating and tables.

Beyond this there will be a new entrance/exit that leads to South Marshall Street where there will be additional parking striped off along the street. Between the street and the building will be a patio that will provide more seating and accommodation. Currently, there is a solid door that is more of a necessary escape hatch that leads to the pine needles that serve as landscaping for the outside of the building. The ugly green awning has been removed as well.

This is, after all, a coffee shop. So, there will be, of course, coffee. New (to them) fixtures and such will be put in the barista and service area and a pass-through door to the kitchen where the plan, according to Terry, could be to eventually serve quiches, salads and the like. That’s not solid yet and there was also discussions of possible contracting of prepared goods to sell from local establishments. There was also a mention of a license to sell beer and wine.

One of the many unique qualities about Twin City Hive is the fact that they don’t use the same ordinary roasters that so many of the other coffee shops around town use; not that there’s anything wrong with those. Twin City Hive, however, use seven different roasters from across North Carolina. That in itself is remarkable. But wait! There’s more.  TCH is partnering with Sarah Chapman of Vida Pour Tea in Greensboro on a gourmet line of teas that will be branded by TCH. Sarah will sell the teas by the glass in her shop, but the only “bulk”/retail sales of the teas will be at TCH. Drinkers will be able to buy it by the glass/cup at the Hive, as well. The blends will be themed around Winston-Salem and its history. The flagship tea will be called “Tobacco Heritage” and when we sampled it you could really taste the notes of tobacco although I don’t believe any was actually used. There will be several other blends as well, including a local take on the traditional English Breakfast tea and a minty tea. Nothing run-of-the-mill for these teas.

Terry said that one of the challenges that they face, even in the current space is that you have warring factions of sort. You have those who may be meeting friends that want to catch up and have a good time, chatting it up. On the other side you have the students, the studies, the workers that need a little less of the loud and more of the quiet ambiance. This location can promote and accommodate both of those demographics. Plus, add the patio for the warmer, dryer months, you’ve got a great place to be productive and have great coffee or tea.

A major distinction that has been bestowed on Twin City Hive is the fact that they have been chosen to participate in the Yelp! event called Coast-To-Coast: Coming Together Because We Mean Business. Only one hundred businesses across North America were selected to attend and TCH is one of those hundred. According to Yelp!’s official release: “November 4–5, Yelp is bringing together the people behind 100 top-rated businesses across North America for a historic event taking place at Yelp’s San Francisco headquarters.” This is quite the accomplishment and accolade; a recognition by their peers.

One last thing is that the partners have recently sold their Segway business to a local competitor. Revolution Gliding Tours was a main component in the initial idea of Twin City Hive. The coffee business has pretty much taken precedence and this move and revised vision is proof of that. TCH will still be a stop on the tour and possibly a facilitator of the tours themselves.

You can find more about all the happenings at Twin City Hive by visiting their website. Twin City Hive is located at 301 Brookstown Avenue, Winston-Salem.